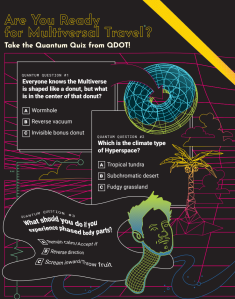 This quiz was created as an interactive activity page for magazines, but on a larger level it functioned as an advertisement for Meow Wolf’s Kaleidoscape at Elitch Gardens in Denver. Meow Wolf targeted an all-ages audience, as well as inclusivity, which meant that children were often exposed to advanced scientific ideas, while adults were often encouraged to behave like children! This quiz harkens back to activity pages that Meow Wolf’s adult audience might remember from their childhood, but also introduces concepts they’ll be exposed to at the actual art ride.

After being exposed to the concept art for this ride, I provided the copy for this activity, which serves as a meta-reference for visitors who have seen other “QDOT content,” specifically a video at the ride’s entrance which introduces the idea of a “donut-shaped Multiverse”. In this way, people who engage with the ad will be rewarded for digging into the ride’s narrative by being both entertained by the activity page and discovering that even Meow Wolf’s advertising is an extension of their narrative.